Ethereum is primed to drop lower as the cryptocurrency faces strong resistances above its current price, analysts say. One trader shared the chart below on September 29th, noting that ETH is likely to move lower as opposed to higher from here.

His sentiment seems to suggest that the resistance Ethereum is currently facing above its price is far more notable than the supports below. So much so that the trader said that the coin could reach $275-300 in the near future. 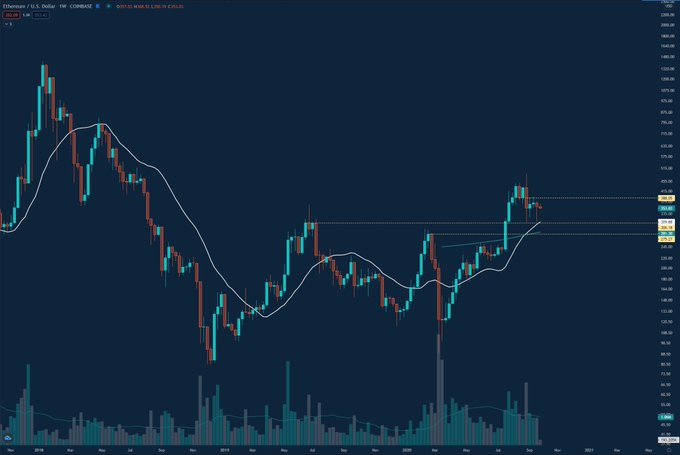 He’s not the only one that thinks that Ethereum will move lower.

Michael Van De Poppe, a crypto analyst and trader at the Amsterdam Stock Exchange, recently said that the asset’s inability to pass the crucial hurdle of $366-375 will be disastrous for bulls. As reported by Bitcoinist previously, he said:

“All right, this one is moving upwards and that’s good. However, the crucial hurdle is around $366-375 to break. If that breaks, $ETH is ready for $415. If not, I assume $280 as a likely possibility for further corrective movements in Q4.”

Despite this price action, the fundamentals of the Ethereum network are strong.

Commenting on the fundamentals of the entire crypto space with an Ethereum undertone, Spencer Noon, head of DTC Capital, said:

“The strong fundamental backdrop to #crypto — which is unlike any bull market previously — is that there are billions of cryptodollars coming on-chain to use #DeFi. Unless that shows signs of slowing, we are on track for a multi-trillion dollar aggregate marketcap for the space.”

Noon has explained that the cryptocurrency market has better fundamentals than ever before. Ethereum has much to gain from these fundamentals, especially as there is high yield-offering opportunities based on the network.

2020-09-30
admin
Share
Previous KuCoin Hacker Exposes Decentralization Theater Among DeFi Projects
Next There is less than 12% of Bitcoin left in the world to mine : Bitcoin