Bitcoin has been garnering significant amounts of investor attention and funding as of late due to its overt strength.

This has come about largely at the expense of altcoins, which have been caught within unrelenting downtrends that have led investors to see intense losses.

There’s a possibility that further downside could be around the corner if BTC continues gaining dominance over the market, but one analyst isn’t too concerned with this possibility.

He notes that altcoin downside is now limited, adding that he expects most to see upward breakouts in the near-term.

Bitcoin has been caught within a firm consolidation phase throughout the past few days, trading within the lower-$13,0000 region following the rejection at $13,800.

Bulls have been slowly pushing it higher ever since this rejection took place.

It is now trading up marginally at its current price of $13,330 while the rest of the market drifts lower.

This strength has been brutal for altcoins, especially newer ones that gained attention as a result of the DeFi bull run.

The past few weeks have been brutal for altcoins, many of which have declined by 50% or more as the focus shifts to Bitcoin.

One investor doesn’t expect this trend to persist for too much longer. He is now noting that altcoin downside is extremely limited.

“I could definitely be wrong but I think downside on altcoins is actually limited from here. I still think this breaks to the upside. While the lion’s share of my exposure recently has been BTC, I’m still holding a handful of alts near and dear to me and optimistic on altcoins.” 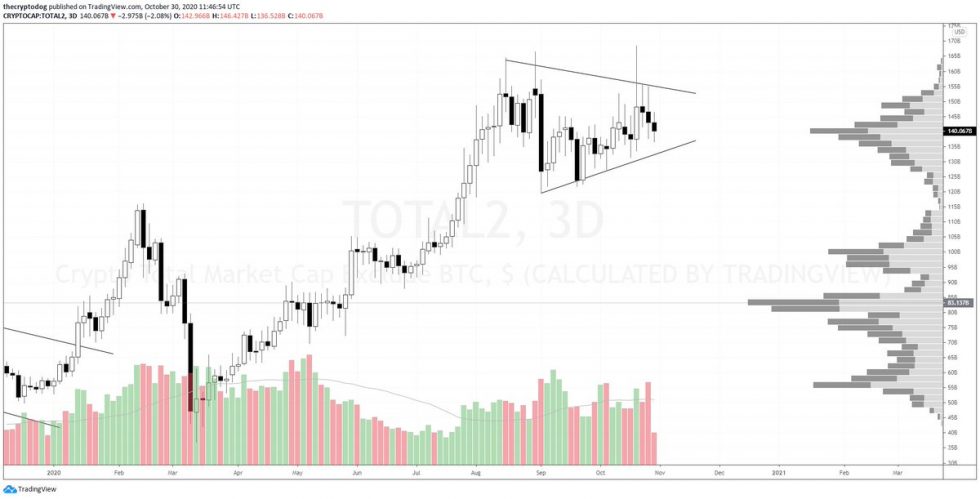 Where the entire market trends next does depend somewhat on Bitcoin, but it does appear that today’s intense altcoin selloff may be followed by serious upside.