Bitcoin and the aggregated cryptocurrency market has been struggling to start a fresh leg higher, with the resistance established last Saturday holding strong for over a week now.

It is a strong possibility that BTC will continue struggling to surmount $12,000 so long as investors’ attention remains fixated on altcoins.

The rallies seen by many small and mid-cap alts have siphoned trading volume and attention away from BTC.

Until these alts start retracing their parabolic gains, investors may continue focusing on trading them over BTC.

Analysts are still noting, however, that the cryptocurrency is well-positioned to see upside, and could soon surge towards $14,000.

At the time of writing, Bitcoin is trading up just under 2% at its current price of $11,890. This is around the price at which it has been trading throughout the past week.

Yesterday, BTC bulls stepped up and propelled the crypto past $12,000, but the selling pressure here proved to be too significant for buyers.

Despite the weakness stemming from the rejection at this price level, one analyst is noting that the benchmark cryptocurrency remains firmly bullish as long as it remains above the upper boundary of its cloud formation at roughly $11,000.

“How to swing trade cheat code: Bullish bias as long as long as the cloud is [below bitcoin].” 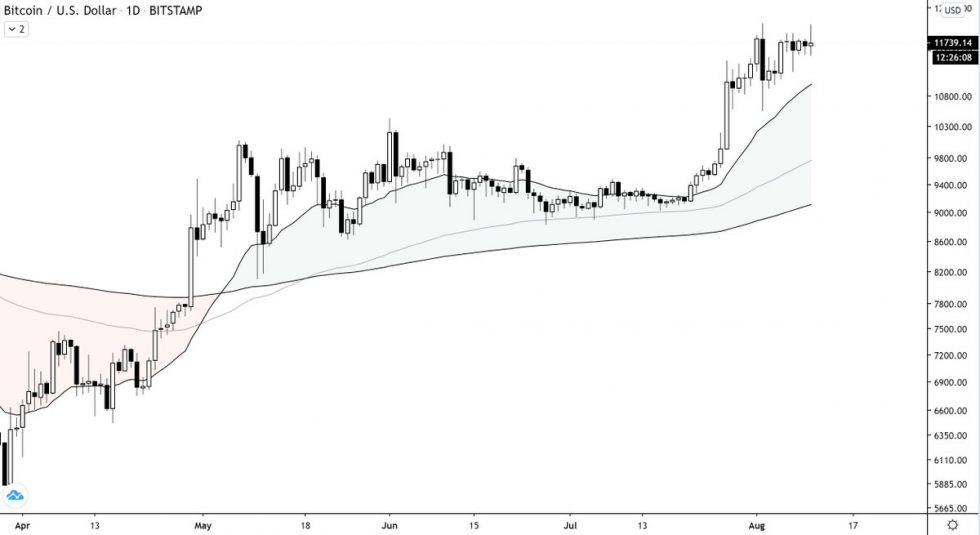 It now appears that $12,000 has become much more than a simple resistance level.

Another analyst explained that he believes a close above this level is all that is needed for BTC to start a new leg higher.

He even notes that this next leg up could lead the benchmark cryptocurrency up towards $14,000 in the coming days and weeks.

“When BTC holds 12k it’s going to teleport to 13-14k region easily imo. Dips are for buying,” he explained.

How Bitcoin trends in the coming hours may reveal whether or not this level will be surmounted anytime soon.

2020-08-11
admin
Share
Previous China’s Blockchain Infrastructure Launches Website for Global Devs
Next Strike released in the app store!!! Strike links to your bank account and pays vendors with Lightning. No hassle on-boarding. Go get it and get rebates on gift cards on bitrefill.com : Bitcoin

The Countdown is on: Bitcoin has 3 Days Before It Reaches Apex of Key Formation

Bitcoin is seeing relatively lackluster price action today, with it consolidating within the mid-$30,000 region ...