Bitcoin Has Held Over $10k for Nearly Two Weeks: What Happens Now?

So far, this year has been a big one for Bitcoin: after a spectacular price crash in March, BTC managed to hold levels between $8,500 and $9,800 for nearly three months, occasionally kissing $10,000. Never before had Bitcoin managed to sustain something so close to $10,000 for such a long time.

Now, however, it seems as though $10,000 may be in Bitcoin’s rearview mirror for some time to come: on Monday, July 27th, Bitcoin broke past the $10,000 marker and hasn’t looked back since.

In fact, Bitcoin’s now seems to be courting the $12k resistance level. Since Tuesday, July 28th, Bitcoin has been dancing between $11,200 and $11,800 and has occasionally reached alllllllmost up to $12k (according to CoinMarketCap), or even past it (on certain exchanges). Now, some analysts are identifying $50k as Bitcoin’s next major target.

What’s driving this latest bull run? Will Bitcoin keep up its momentum, or will BTC once again fall below $10k? 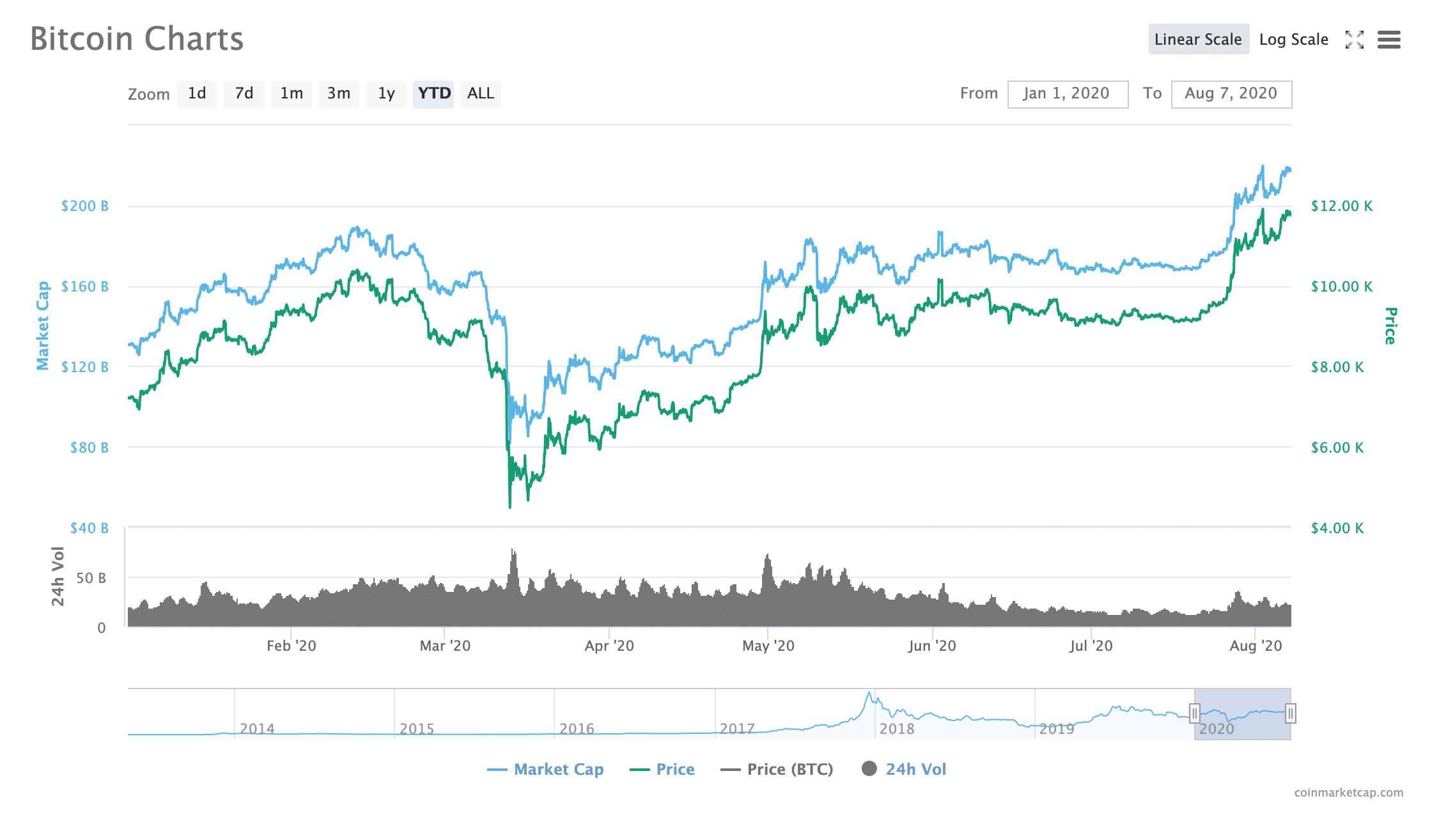 Bitcoin may be benefitting from global economic instability

Many experts within the cryptocurrency space seem to agree that there are several main factors that are pushing BTC upward: primarily among these, however, is global economic instability.

Indeed, Marie Tatibouet, chief marketing officer at cryptocurrency exchange Gate.io, told Finance Magnates that the price of Bitcoin may have been boosted by “the current situation of the world.”

This includes “the instability caused by the pandemic, the stock market falling, the US and China market wrestling ‘dollar vs. yuan’, or a big fear of inflation on a global scale, just to highlight some,” she said.

Indeed, the economic turmoil that has resulted from the global pandemic has also caused people to reconsider their beliefs about their national currencies, a factor that could also be contributing to Bitcoin’s ascent.

For example, Evan Bayless, the operator of WhatIsMoney.info, also pointed out to Finance Magnates that “we as a society are very accustomed to looking at the value of everything in terms of our national currencies: we think that dollars and other major fiat currencies are stable,” he said.

However, “the incredibly fast and drastic response of the Fed and other central banks to the COVID-induced lockdowns (and the subsequent economic fallout) has caused the idea that fiat currencies may not be a consistent yardstick for measuring value to begin to enter the public consciousness,” he said.

In other words, the massive amount of quantitative easing that the United States central bank decided to do earlier in the year seems to have shaken the public perception of the almighty dollar and other major fiat currencies.

Therefore, Bitcoin may be capitalizing off of its functionality as an inherently scarce asset: “as central banks continue to pump liquidity in the system, investors are looking for anything that has a limited supply and cannot be debased,” Evan Bayless told Finance Magnates.

“This is why you’re seeing blue-chip stocks, gold, and bitcoin seeing massive rises with other assets following suit, in accordance with how easy it is for producers to create more of the asset and push the price back down. We are seeing a scramble for asset preservation.”

Gate.io’s Marie Tatibouet also believes that the current public discussion about the nature of money may be benefiting Bitcoin: “Bitcoin was created as an alternative option, and its price movements are proof of how more and more investors are opting for that alternative.”

However, it’s unclear whether or not the momentum that Bitcoin seems to have gained from the global events of this year will continue into the future.

Now that Bitcoin seems as though it may have stabilized above $10k, a number of Bitcoin-bullish commentators and analysts seem to have focused in on a new target: $50,000.

For example, Vinny Lignham, chief executive of CivicKey and general partner at MultiCoinCapital, wrote on Twitter that because Bitcoin “doesn’t conform to the typical Sharpe Ratio calculations,” it could be possible that “if Bitcoin doubled from here, it’s likely to go past $50k, which would be a 5x increase from today. This essentially means a 2x increase produces, in effect, a 5x upside.”

#Bitcoin doesn’t conform to the typical Sharpe Ratio calculations. For instance, if Bitcoin doubled from here, it’s likely to go past $50k, which would be a 5x increase from today. This essentially means a 2x increase produces, in effect, a 5x upside.

Additionally, Altcoin Forrest reported on August 1st that “ $150,000 worth of Bitcoin (BTC) $50K call options for June and December 2021 strikes” had been traded on LedgerX over the course of the past several weeks.

The traders who bought these options were essentially paying “$1,000 for the privilege of purchasing Bitcoin 440% above the current price in 18 months”–another factor that seems to demonstrate a strong belief that Bitcoin is on its way up to $50k.

And at the moment, things do look positive for Bitcoin’s future: Sergei Khtirov, founder and chief executive of Listing.Help, told Finance Magnates that currently, “[…] there are still huge volumes on the market, and the market is constantly fueled by positive news and the growth of other cryptocurrencies.”

Bitcoin has lost momentum over $10k before

In other words, there are plenty of steps on the road from $12k to $50k: for example, “in our opinion, the previous resistance level at $14000 may be tested in the second half of this year, Khitrov said.

And, of course, there is still a good chance that Bitcoin’s current momentum above $10k could come to a screeching halt–and even reverse.

“It is always possible that a ‘Bart Simpson’ trading pattern will be repeated in case of negative news on the market,” Khitrov said. “In this case, a retest of the level of $10,000 is quite possible, which remains a significant psychological benchmark. Falling below it will mean the end of the recent bull run.”

After all, it wouldn’t be the first time that Bitcoin seemed as though it was there to stay over $10k before falling back to much lower levels.

For example, throughout much of June, July, and August of 2019, the price of Bitcoin sat comfortably above $10k, at one point reaching as high as roughly $13,500.

However, in September, BTC seemed to lose its momentum: by midway through December of 2019, BTC had fallen to roughly $7,170. 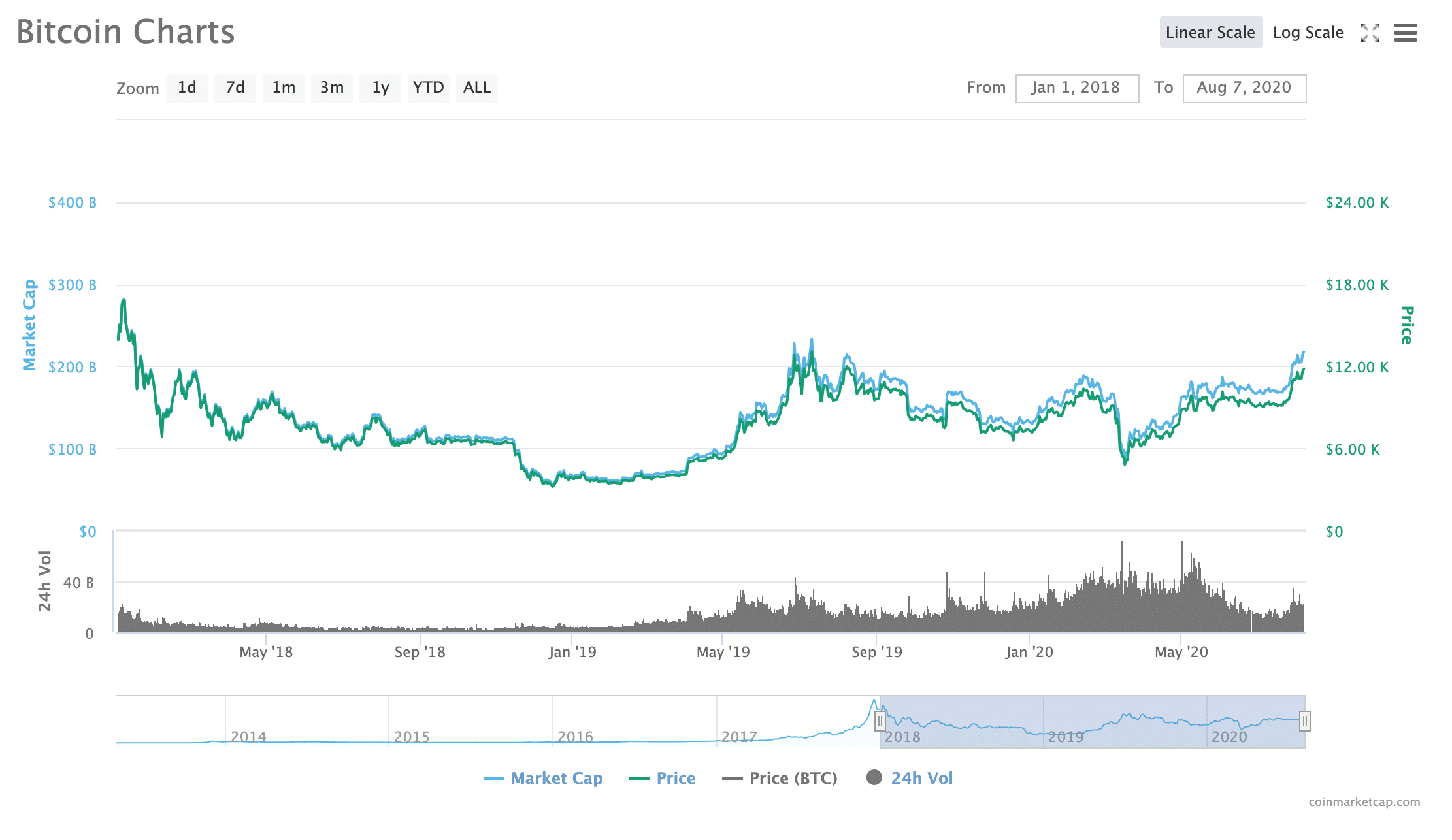 Indeed, Daniel Worsley, co-counder and chief operating offcer of LocalCoinSwap, told Finance Magnates that “it is definitely possible that we will see sub-$10k prices again.”

“Bitcoin has a history of high volatility,” Worsley explained. “Although it has reduced in recent times, it is still prevalent. I do not think it will ever sit below this price for long moving forward. I would expect to see strong resistance at the $10k level as this is a big barrier for investor psychology.”

On the other hand, though, “in 2015, Bitcoin reaching $100 seemed unrealistic,” Worsley pointed out. “Now, a price that low is unimaginable.”

Therefore, Worsley believes that just as Bitcoin could fall back below $10k again, it’s also possible that “Bitcoin could easily hit $50k.”

After all, “the pandemic is far from over and more and more people are now learning about Bitcoin and cryptocurrencies.”

And indeed, it does seem as though more people than ever are interested in learning about and investing in cryptocurrencies as a way to make extra money: a number of cryptocurrency exchanges and fintech apps that support cryptocurrency trading have reported high numbers of new users over the past several months.

Increased levels of interest in cryptocurrencies that have developed recently are also evidenced by the altcoin boom that has been taking place: a number of altcoins–particularly in the DeFi sector–have made headlines over the past several months for their positive price performance.

Of course, some of the altcoin success seems to be tied with Bitcoin’s performance: “altcoins play a game of cat and mouse with Bitcoin,” Evan Bayless explained. “When Bitcoin surges, traders sell alts into Bitcoin, and vice versa.”

Therefore, Daniel Worsley believes that the current altcoin ‘season’ could draw to a close if Bitcoin’s positive performance keeps up: “many low-cap altcoins will be adversely affected by increased Bitcoin prices as current holders will convert these holdings to Bitcoin in an attempt to maximize profit,” he said.

However, “higher-cap and more established altcoins like Ethereum will likely benefit from increased interest in Bitcoin by proxy as new investors will look at other investment opportunities in the crypto-space and these have a proven track record and use-cases.”

On the other hand, though, Evan Bayless believes that “we may be at the cusp of another period similar to 2016/2017 where scammers (and some well-intentioned entrepreneurs) attempt to hijack bitcoin’s momentum by promising ‘bitcoin but better’ and duping retail investors into parting with their bitcoin in order to get in on potentially higher gains.”

What are your thoughts on the recent price movements of Bitcoin? Will Bitcoin reach $50k? How is Bitcoin affecting altcoins? Let us know in the comments below.

For the tech world, 2021 has started off on a rather strong and unusual ...