Bitcoin is currently trading within a short-term consolidation phase as buyers and sellers struggle to control its trend.

This consolidation phase came about after a slight rejection at its $16,000 highs set just a day ago.

It has yet to see any sustained decline in price due to this, but it has been ranging sideways for quite some time now.

One trend that could hamper its outlook in the mid-term is a sudden influx of selling pressure from Bitcoin miners, who had previously been holding strong throughout the course of this rally.

Because of the decline in trading activity on margin platforms like BitMEX, this has been a spot-driven rally that has lacked any severe selling pressure.

That being said, this could soon change as miners begin offloading their Bitcoin holdings onto the open market.

The effects of this have already been seen, as the crypto is currently consolidating as bulls absorb inflows of sell orders.

At the time of writing, the cryptocurrency is currently trading up marginally at its current price of $15,600.

Analytics Firm: BTC Miners are Beginning to Sell Their Crypto

One analytics firm explained in a recent tweet that Bitcoin miners have begun offloading some of their holdings, which could be the reason why BTC’s uptrend is slowing down this morning.

“BTC miners started selling some bitcoins. MPI (Miners’ Position Index) hits the year-high. MPI is all miners’ outflow divided by its one-year moving average,” they said while pointing to the below chart. 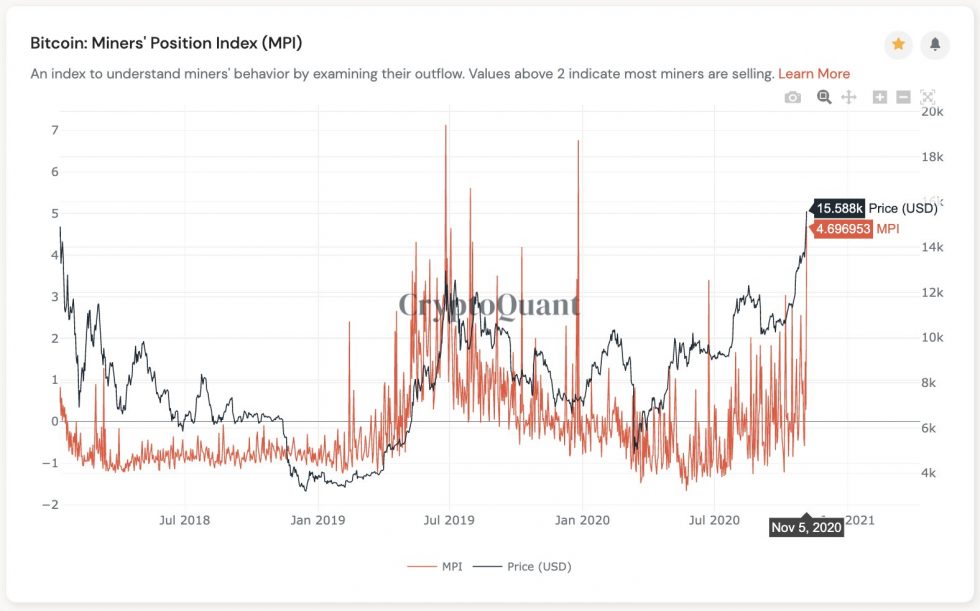 It is unlikely that, given the current strength seen by the cryptocurrency, this will be enough to slow its mid-term uptrend or spark any selloff.

That being said, it may place some pressure on bulls that tests their underlying strength and causes the crypto to see a slight consolidation phase.