Bitcoin was among the only safe-haven assets that didn’t surge following the latest Donald Trump news.

The benchmark cryptocurrency stared at losses over the previous 24 hours, falling 3.52 percent to $10,489 as of 0800 UTC. Its latest decline came after the US authorities filed criminal charges against the owners of BitMEX, one of the leading crypto derivative platforms by volume.

Bitcoin’s downside move accelerated in part after Mr. Trump revealed that he and his wife Melania were tested positive for coronavirus. The global market responded negatively to the event, with the futures tied to Wall Street indexes all going down in tandem.

At the same time, safe-haven assets like gold, bonds, and the US dollar surged.

Volatility Ahead for Bitcoin

Jeff Henriksen, the co-founder/CEO of Thorpe Abbotts Capital, told CNBC that he expects the global market to stay volatile as the US president’s diagnosis brings the coronavirus back into the spotlight.

“Those [kinds] of narratives have been playing out over the last three months,” the market strategist said. “You can see it in how some days you will see more growth-oriented companies — companies that are deemed to do well in any kind of world whatever happens to COVID — versus companies that need a recovery do well.”

Bitcoin has traded continuously under the risk of stock market corrections this year. Earlier in March 2020, the cryptocurrency slipped by more than 60 percent in just 48 hours of trading. Its downside move appeared as demand for cash surged – for filling investors’ margin positions and offsetting losses in the stock markets. 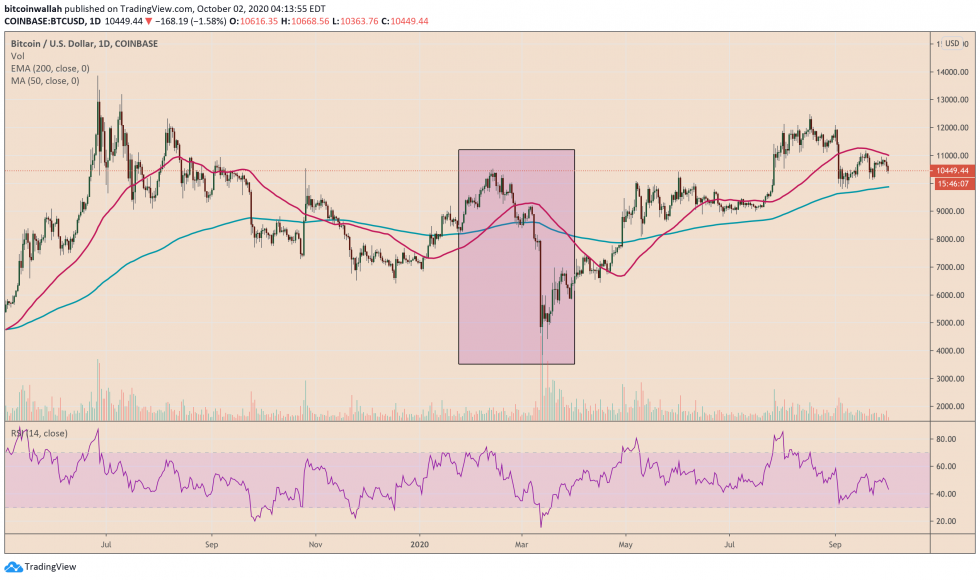 Mr. Henriksen noted that Mr. Trump’s coronavirus diagnosis increased the political uncertainty around the US presidential election on November 3. He added that he expects the tech stocks to do well, but cannot say the same about lower-cap firms with a history of cyclical performances this year.

That increased Bitcoin’s bias-conflict. The crypto now risks battling the coronavirus narrative once again, a period that typically sends investors to the safety of cash. At the same time, a long-pending stimulus bill is ensuring to keep BTC/USD lower.

As Mr. Trump goes into quarantine, his absence from work risks stalling the second coronavirus aid to American people.

The House, led by Democratic speaker Nanci Pelosi, passed a $2.2 trillion relief bill on Thursday. The vote came after Ms. Pelosi and US Treasury Secretary Steven Mnuchin took almost a week to discuss the size of the aid. The latter made a counteroffer of $1.5 trillion.

Nevertheless, people are still doubtful whether the House bill would get approval from the Republican-controlled Senate.

“It is a good proposal, but it is one she is not interested in,” said White House press secretary Kayleigh McEnany of Mrs. Pelosi. “Right now, we have the $1.6 trillion number, and I’ll let you know if that number goes up.”

The delay adds further downside pressure on the Bitcoin market.

Ethereum has dramatically underperformed Bitcoin over the past two weeks. The coin has gained 13% ...