Ethereum’s price action has been mirroring that of Bitcoin’s throughout that past few days, which has resulted in it seeing an incredibly tight consolidation channel between $344 and $349.

This is quite similar to Bitcoin’s current range between $10,500 and $10,600. Until the cryptocurrency is able to shatter either the upper or lower boundary of this range, it will continue lacking any directionality.

Despite ETH still trading well-above its recent lows of under $320, it is now stuck below a crucial level that bulls must flip if they want to boost its mid-term outlook.

$360 has been a pivotal level in the past, and still remains a target for bulls. A failure to climb above this level could be quite bearish for Ethereum.

The entire cryptocurrency market has been struggling to garner any sustainable momentum throughout the past few days and even weeks.

Although the trading ranges that Bitcoin, Ethereum, and other digital assets have seen over the past few months are rather wide, they have been rapidly narrowing.

At the time of writing, Ethereum is trading down marginally at its current price of $346. This is around the price at which it has been trading throughout the past two days.

While speaking about where Ethereum needs to trend in the short-term to see significantly further upside, one analyst explained that $360 is a key level to watch.

“ETH / USD: Nice initial reaction to LTF support but still need to see some more strength and eventually flip $360 back into support if we want to see some real momentum… Markets still trading sideways for the time being,” he said while pointing to the below chart. 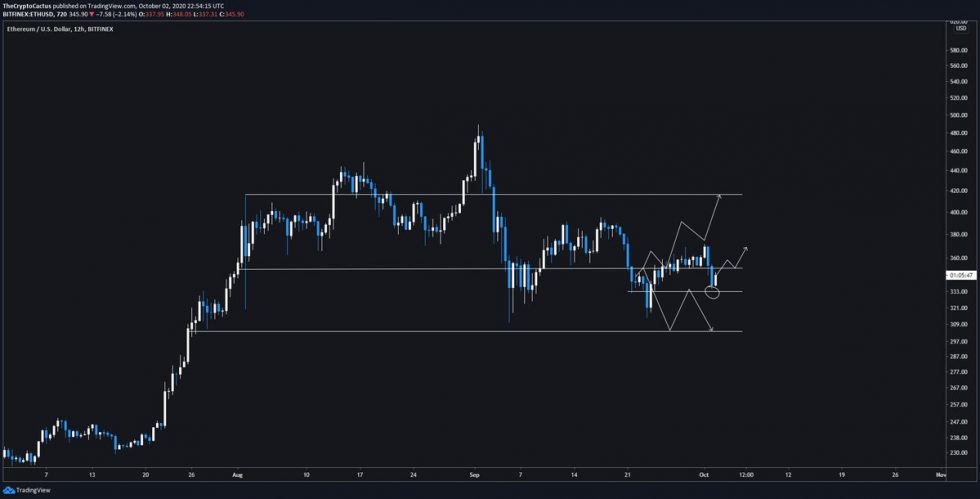 Whether or not bulls can step up and recapture this level will likely depend largely on Bitcoin’s resolution to its current bout of consolidation.

Bitcoins Ongoing Surge is Its Most Important Breakout Ever: Analyst

Bitcoin has seen some further upside today despite the intense selloff seen in the stock ...