While Bitcoin is making its way through the stratosphere, the stock market is still firmly earthbound. The leading cryptocurrency briefly eclipsed $14K this week, outperforming traditional asset classes as lockdowns return across Europe and political tensions ratchet higher in the run-up to the US election day.

This week’s surge tops off a fantastic month for Bitcoin, which made 22% gains in October as gold traded sideways and the S&P 500 dropped 2%. 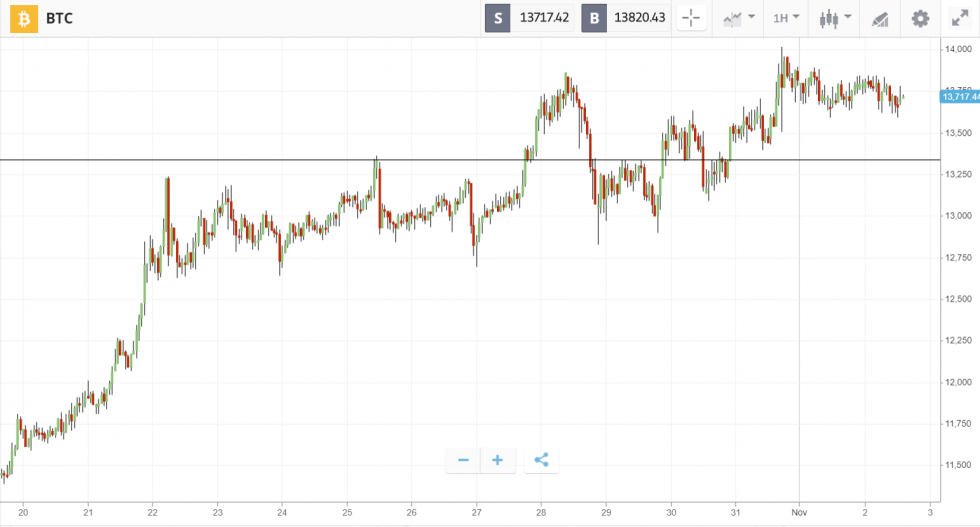 In the news, events continue to show the mainstreaming of Bitcoin by big financial institutions. Singapore’s largest commercial bank, DBS, has launched a digital asset exchange for Bitcoin and three other top cryptocurrencies, and fully-licensed Swiss financial institutions like Gazprombank has been approved to offer Bitcoin services.

12 years after the Bitcoin whitepaper was released, prices hit $14K on some exchanges—pushing past the peak of 2019 to mark the highest prices seen since 2018.

This momentous occasion was marked by other adoption milestones, with Iran introducing new regulations asking miners to sell their Bitcoin to the central bank, and Microstrategy CEO Michael Saylor revealing that he personally owns 17,732 BTC, in addition to the 38,250 BTC held by his company.

Year-to-date, Bitcoin is now up almost 90%, with an increase of roughly 20% in the past two weeks.

As Bitcoin has pushed higher over the last week, altcoins have been sinking. Stellar and Tezos are down 4%, while NEO and BNB have fallen further with 9% losses.

Sell-offs like this often happen after major altcoin rallies like “DeFi Summer“, as traders consolidate profits by switching back to Bitcoin before another alt season arrives and money flows back into smaller cryptocurrencies.

This dynamic is reflected in Bitcoin dominance, which climbed in October as the leading cryptocurrency clawed back market share from the rise of altcoins during the summer.

To support the evolution of the Ripple ecosystem, eToro is working with a new blockchain network, Flare.

On December 12th, a snapshot will be taken of eToro XRP wallets to determine the distribution of Flare’s Spark token.

Traders on eToro and eToroX are eligible, and the distribution will happen in the first half of 2021, subject to Flare’s discretion. Read more on the Ripple feed.

In a display of astonishing strength, Bitcoin finished October at the highest monthly close since January 2018—a level that also marked the top of the biggest rally of  2019.

Now as Bitcoin consolidates below this key juncture at $14K, a key catalyst is approaching. Global markets are eagerly awaiting US election night on Tuesday, which promises to bring significant volatility—with the potential for turbulence heightened by the possibility of a contested outcome.

If BTC blows through $14K, the bull market is likely to enter full swing, and we could rapidly approach $20K. On the flip side, a strong rejection from this key resistance level is likely to significantly dent market sentiment.

2020-11-02
admin
Share
Previous Ethereum Could Plunge to $315 if Bulls Fail to Defend One Key Level
Next Blockchain News – ICOCalendar.Today