JP Morgan analysts recently released a report acknowledging these trends. The analysts noted that Grayscale’s October data, specifically regarding the Grayscale Bitcoin Trust, suggests that BTC may be increasingly acting as an alternative to gold. Gold has long been seen as the traditional hedge against inflation, though Bitcoin may be gaining steam according to JP Morgan: 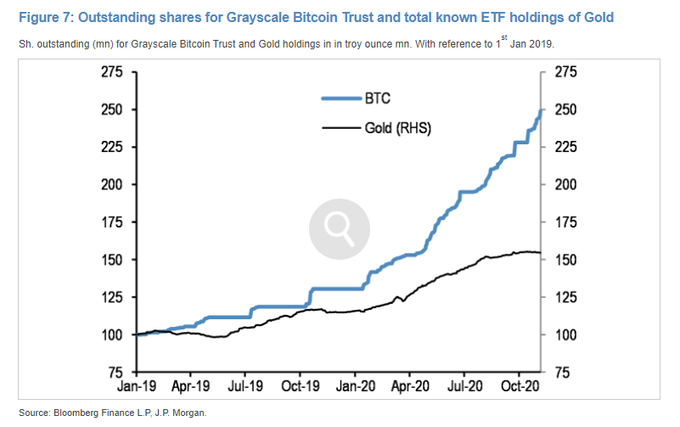 Paul Tudor Jones, a billionaire Wall Street investor, recently said that he thinks Bitcoin is the best inflation trade in the world.

“The reason I recommended Bitcoin is because it was one of the menu of inflation trades, like gold, like TIPS breakevens, like copper, like being long yield curve and I came to the conclusion that Bitcoin was going to be the best inflation trade.”

Analysts think that this much buying activity by institutional traders will cause a “sell-side liquidity” crisis.

“Light,” a prominent crypto-asset trader, recently commented that institutions could trigger this crisis:

“A lot of the buy pressure that is competing for tightening BTC sell-side liquidity these last weeks is coming from institutionals. They are buying from people who are in the disbelief stage.”

Recent news events indicate that this buying volume is there. MicroStrategy bought $425 million worth of Bitcoin over two months while Square acquired $50 million worth of BTC for its own balance sheet. There has also been anecdotal evidence shared regarding large institutional players buying the leading cryptocurrency via spot exchanges.

What’s important about this supposed “crisis” is that analysts expect buying volume to pick up even more dramatically as selling volume tapers off.

These analysts specifically eye retail investors, which have yet to re-enter the cryptocurrency space en-masse since they largely left in 2018’s bear market. Retail investors were what triggered Bitcoin’s rally to $20,000 in 2017.

Bitcoin and the entire crypto market are showing some signs of strength on this relatively ...