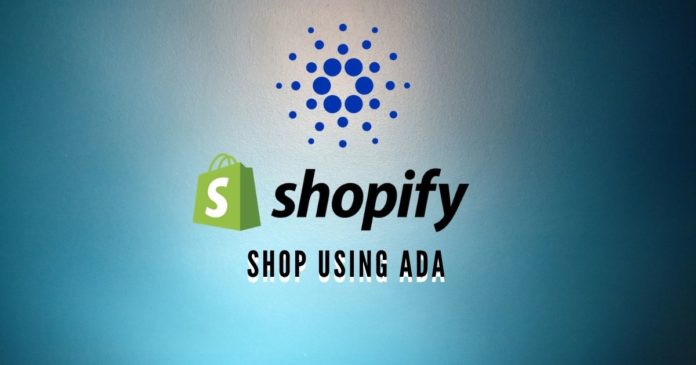 A project led by an Australian developer aims to build Cardano integrations with e-commerce. Interestingly, it starts with the Shopify e-commerce platform, one of the leading e-commerce platforms. It is accessible to 500,000 online businesses across the globe. According to developer Jeronimo Backes, an app to facilitate the ADA payment on Shopify is almost ready.

Currently, Shopify stores process crypto payments using digital asset processing APIs. Coinbase Commerce, BitPay, and CoinPayments offer these APIs. Impressively, the app developed by Jeronimo will remove the need for any intermediary. According to Jeronimo, the Shopify store owners would need to add this app just like they add any other payment processing app. Unlike other crypto processing apps, the users will have to send Cardano ADA tokens directly to the store’s private wallets. Effectively, there is no intermediary who can see these payments.

In a Reddit post, Jeronimo mentioned that Shopify is just the first step. With such integration’s users will be able to “sell stuff from a static website or a readme file in a Github repository”.

According to the Australian developer, Cardano is the most-enterprise-ready scalable blockchain. Moreover, it is a futureproofed blockchain. He adds that blockchains like Ethereum, EOS, and Tron are struggling with a proof-of-concept. Moreover, these are far from being ready for enterprise adoption.
Jeronimo also plans to build on Cardano’s Goguen mainnet. The Goguen mainnet launch might happen at the end of 2020. He plans to add support for recurring payments, subscriptions, refunds in the app using Goguen. The SHOP stakepool is sponsoring Cardano-Shopify project which is an open-sourced project. This encourages developer contributions and enables full customization of the developed app.

A brand-new wallet. Why?

According to Jeronimo, every coin that uses BIP-44 protocol (like BTC) has this thing known as the address gap. As Cardano also uses a BIP 44 protocol, it will also face the address gap challenge. In his Reddit post, Jeronimo explains – If a store generates 20 payment addresses but does not receive payment in any of them, his regular wallet will not show any payment for the payment address 21.

To tackle this challenge, he had to build a brand-new wallet that will take around two months to build and test. On September 18 he released a video of his ENVLP wallet which is currently under development. According to the video, a seller needs to update the order status in the seller database manually.

However, Jeronimo explains that he will automate this part. Once a buyer submits payment to the blockchain, the order will be fulfilled on Shopify. And this will allow for the delivery of goods. Additionally, the new wallet will also be capable of automatically calculating taxes from the main fund’s pool.

Filecoin, a file storage blockchain network that promises to become a storage protocol of the ...