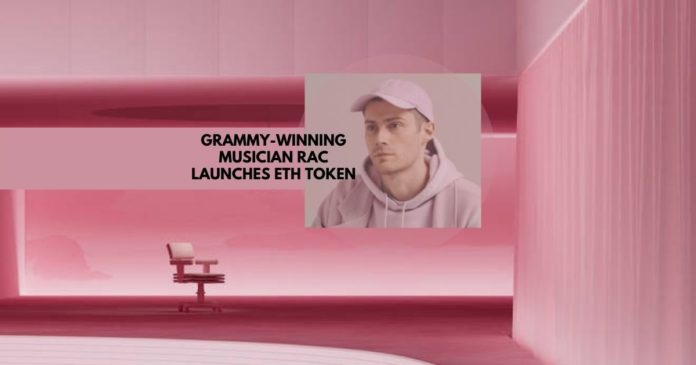 RAC, who disclosed the launch of $RAC via a blog post, revealed he launched the initiative because he was fascinated with crypto over the years. He further explained that he believes the initiative can create a new paradigm for creative ownership, particularly between artists and their communities.

The $RAC, built on the Ethereum blockchain, was launched in collaboration with Zora, a digital currency-based platform where goods are purchased, sold, and traded through tokens.

Anjos states, “I share their belief [Zora] in the new paradigm they are building and their mission to help all artists and communities take ownership of the value they create.”

The electronic musician further disclosed that he hopes his new currency will provide more value to his fans. He aims to reach this goal by creating an in-house community that grants exclusive access to various perks and content without the need for monetization through third parties.

Anjos added, “Crypto enables communities to capture the value they create instead of being monetized by pre-existing platforms. And $RAC is an active experiment pushing the envelope on these primitives.”

Notably, RAC has been a crypto enthusiast since 2017. After winning the Grammy for Best Remixed Recording, he collaborated with ConsenSys-owned startup Ujo Music. He put his album “EGO” on the Ethereum network, allowing fans to buy it with ETH.

RAC distribution and other developments

At launch, the blog post disclosed that there would be 10 million $RAC at genesis. The announcement notes that a majority of the minted tokens will be distributed to active fans. What is interesting is that people cannot purchase $RAC; instead, they have to earn the token.

Among these plans, 200,000 $RAC will be retroactively rewarded to RAC’s current Patreon supporters. Another 150,000 will be given to the artist’s Twitch supporters. 25,000 $RAC has been set aside for RAC’s Bandcamp supporters, and 25,000 is slotted for past RAC merch buyers. The artist plans on handing out 50,000 tokens every month to his Patreon supporters.

It’s worth noting that RAC has been active in the crypto space. He earlier launched a tokenized, limited-edition cassette on Zora. The initiative was aimed at helping other creators follow Saint Fame’s successful experiment and launch limited-edition products themselves.

Aside from RAC, several popular music artists have also embraced and invested in digital currency. One notable mention is Guy Berryman of Coldplay who recently joined the crypto space.

Also included are DJ Khaled, Lupe Fiasco, Gramatik, Pitbull, and Imogen Heap. It seems a number of artist are willing to delve into cryptocurrency to explore its benefits.

Standing out from the crowd is a crypto enthusiast and Grammy-nominated rapper and entrepreneur, Akon. He recently disclosed his vision to launch his forthcoming Akoin cryptocurrency and a blockchain-powered city in the country of Senegal.

It’s also worth noting that, besides Zora, other projects are also combining music and blockchain. Some of these projects are Ujo Music, Choon, Open Music Initiative, and Musicoin. They are all establishing unique ways to incorporate blockchain tech into how music is produced and distributed.