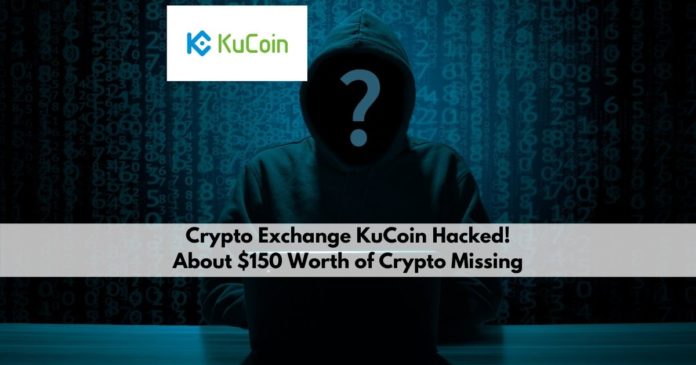 Popular cryptocurrency exchange KuCoin has released details of a security breach on its platform.

According to KuCoin, about $150 worth of Bitcoin, Ethereum, and several other cryptocurrencies have been moved from the exchange platform. This announcement comes as a shock to the exchange users because KuCoin prides itself as being both advanced and secure.

KuCoin confirmed the hack in a blog post on September 25, 2020. Disclosing that while its hot wallet was the major recipient of the hack, its cold wallet remains relatively safe. The exchange furthermore promised users affected by the hack the definite reimbursement of their funds. The exchange pointed out that all missing funds “will be covered completely by KuCoin and our insurance fund.”

Details of the hack

Foul play was first suspected when users began complaining about surprising withdrawal issues. The exchange first attributed the issue to a system downtime. One Telegram admin actually told users to pause all withdrawal or deposit requests as transactions weren’t going through.

The hack, however, became obvious when approximately $150 million worth of crypto had been transferred to a different address. About $4 million worth of Ether, and about $146 million in several other tokens, were missing from KuCoin. According to the official update announcement, some of the missing funds were part of the exchange’s total assets holdings.

Crypto data company Cryptoquant pointed out the large withdrawal of Bitcoin as a sure indication of a hack. According to Ki Young Ju, CEO of Cryptoquant, “If it were merely a systems issue, outflows would go straight to zero without a spike.”

It seems #Kucoin got hacked.

Usually, after being hacked, the $BTC outflow increases rapidly and then becomes zero. Since 20:00 UTC on September 25th, the outflow has continuously been zero.

Speaking on the update, KuCoin CEO Johnny Lyu provided more details of the hack during a livestream.

According to Lyu, the exchange shut down its server the moment it realized the security of its platform has been breached. Nonetheless, the transfers continued as the wallet was already compromised.

Update on the hack

Speaking to its exchange users, KuCoin reiterated on the safety of its cold wallet fund. Plans are in place to carry out a detailed security assessment to prevent a future recurrence of the breach. Deposits and withdrawals are still suspended and will remain so throughout the security assessment.

The crypto space has attracted the attention of people worldwide, both the good and the bad. Scams, hacks, thefts, and other security breaches are a major part of the crypto space.

Previously, Altcoin Buzz covered details of the telltale signs of a crypto scammer and scam projects.

Zcoin, the privacy-focused cryptocurrency announced the testnet launch of its next-generation privacy protocol Lelantus on ...