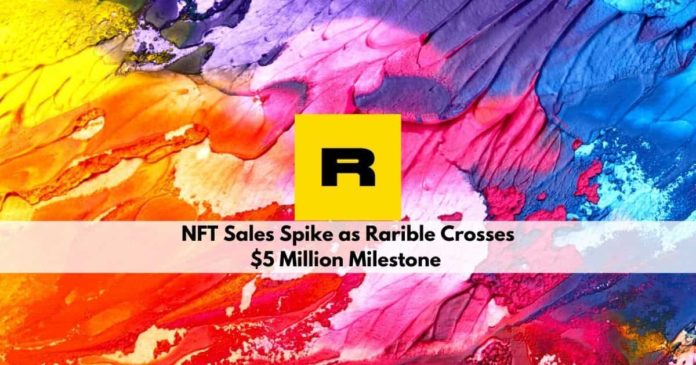 Nonfungible tokens (NFT) have recorded an unprecedented increase in sales. Leading the charge is Rarible, an NFT marketplace where digital collectibles can be “minted,” bought, and sold.

Launched this year, the Rarible marketplace has garnered the attention of enthusiasts worldwide. Sales on the NFT platform have spiked in recent times, with total monthly sales on the platform reaching up to a whopping $5 million. This figure currently dwarfs that of OpenSea, the supposed king of the NFT marketplace.

The DeFi space is quite distinct from the nonfungible token (NFT) marketplace. Analysts have, however, linked the surge in NFT marketplace sales to the rise in DeFi protocol usage. According to reports, the anticipated bull market, liquidity mining, etc. associated with the DeFi space is also the cause of the spike in NFT sales.

Prior to its July 15, 2020, governance token (RARI) launch, Rarible was basically unknown in NFT space. The governance token launch, as well as mouthwatering incentives for buying and selling art, attracted people to the NFT marketplace.

A September 16 report by Messari, a crypto asset data website, pointed out that the marketplace this month crossed the $5 million benchmark in monthly sales. Messari’s report further disclosed that $1.5 million of this amount was attained in a single day. Interestingly, a single item of digital art known as “Right Place & Right Time” sold for $100,000 on September 21, 2020. This rising sale is a clear indication that the NFT space is relatively unaffected by the current economic crisis.

Although 2020 has been dubbed the year of DeFi, the NFT marketplace is also steadily garnering attention this summer.

News of the Rarible marketplace sales spike and increasing interest in digital art has attracted the attention of top people in the crypto space.

According to reports, Anthony Pompliano and Jason Williams, co-founders of Morgan Creek Digital, have allegedly made a bet on digital art.

Pompliano in his newsletter, summed up the details of the bet. He pointed out that the bet is based on the fact that digital art is predicted to surpass traditional art. This seems far-fetched though as the traditional art market has a $65 billion cap while the digital art cap is currently at $10 million.

Sam Bankman-Fried, CEO of FTX, in response to Pompliano, had a doubtful stance. His tweet sparked a debate on the future of NFTs and the price of art in general.

However, it is important to also note that impossibility is a term almost non-existent in the crypto space. Case in point, just look at DeFi’s current phenomenal rise, the current increase in general altcoin prices, and even the Bitcoin bull run of 2017.

2020-10-03
admin
Share
Previous CFTC promises to protect ‘the burgeoning markets for digital assets such as Bitcoin’
Next Every Credit Card a Tribe, Every Crypto Coin a Scaling Debate