Polkadot has gained a lot of attention in the blockchain eco-space. Many projects have now been implemented on Polkadot.

In our previous article, we explored Polkadot architecture. In this article, we will see some of the famous projects on the Polkadot network.

But what are the reasons behind the network grabbing so much attention? Let us look at the benefits offered by the Polkadot network.

As we have already mentioned, the Polkadot network consists of a large number of heterogeneous blockchain shards called parachains. These parachains are responsible for carrying out the major transactions and activities of the network, and this feature offers the following benefits:

Apart from the above-mentioned benefits, Polkadot also offers some more tools and applications that projects can use. But before that, we will understand what does Substrate mean and what is the role of Substrate in the Polkadot network.

You may have heard about the term Substrate multiple times if you are following Polkadot’s development.

A Substrate is an open-source, scalable, and modular framework for building blockchains. It comes with everything that you need to build your blockchain.

You can find many reusable components called frame pallets, or Substrate’s pallets, that allow customizing logic implementations depending upon the requirements.

It is built on the Rust programming language, and it allows for easy, safe, and fast development of blockchain code.

The Substrate comes with a set of tools that one can use.

The Polkadot Telemetry Service displays the network information, which means what nodes are running the chain, what software versions they are running, sync status, and location. 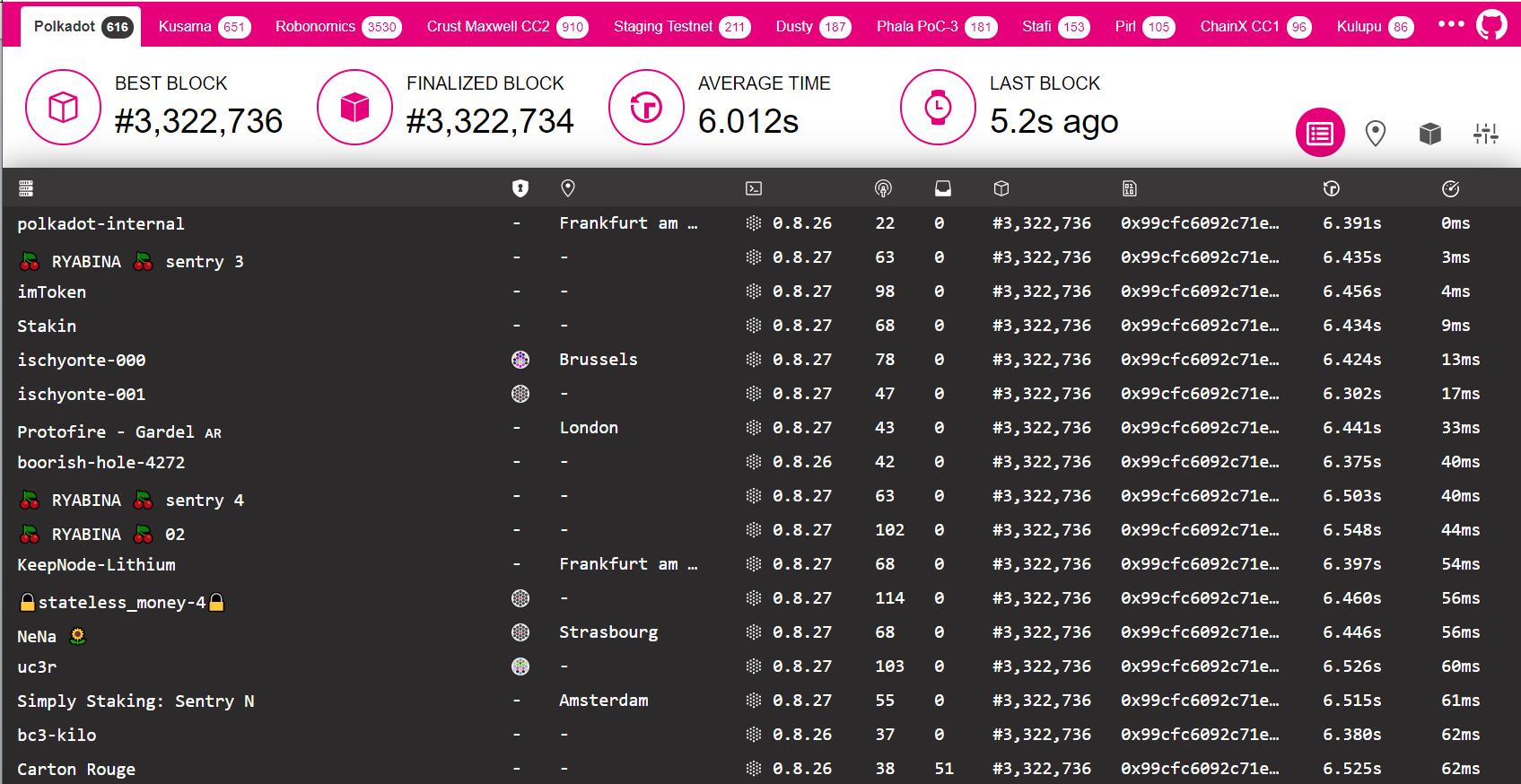 Polkabot is an extensible chatbot who knows how to speak both on the Matrix.org (open network for secure, decentralized communication, which allows users (or bots) to communicate with each other) and Polkadot networks. Users may create custom bot plugins. Read the link here for more info. 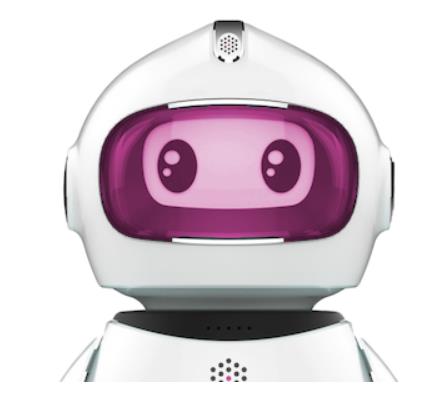 Polkascan is a blockchain explorer for Polkadot, Kusama, and other related chains.

Polkawallet is a wallet for Polkadot assets.

Projects Based on PolkaDot

You can see the list of projects built on Polkadot by visiting the PolkaProject site. 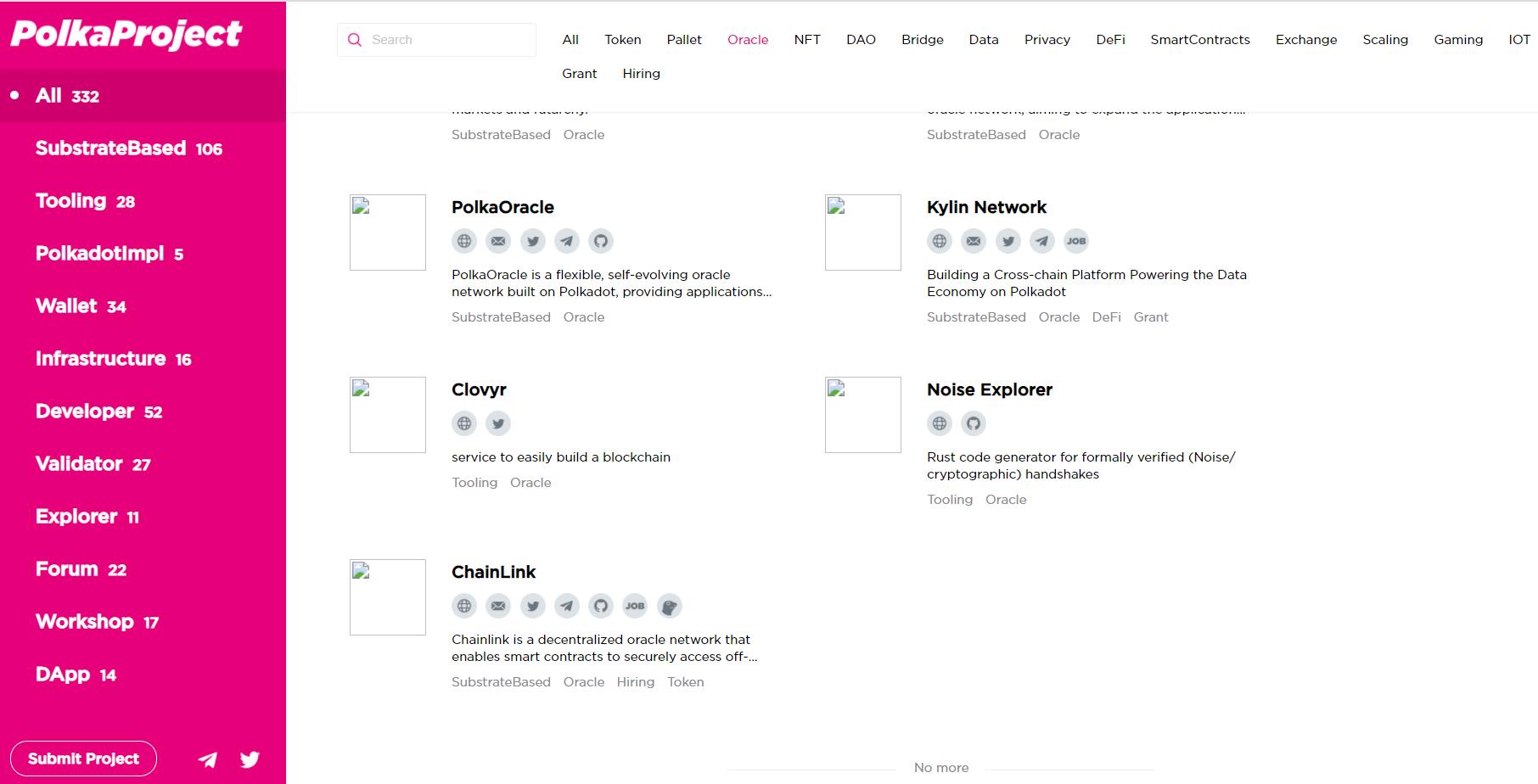 At the time of publication, there is a total of 347 projects built on Polkadot. Out of these 347 projects, 111 projects are built on Substrate, and the rest are on tooling, wallet, infrastructure, developer, validators, explorers, forums, workshops, dApp, etc.

You may find some of the projects originated on the Ethereum blockchain but now have been implemented on Polkadot, in addition to Ethereum.

We will see some notable projects built on different sections of the Polkadot platform.

You can see the following projects listed under smart contracts. 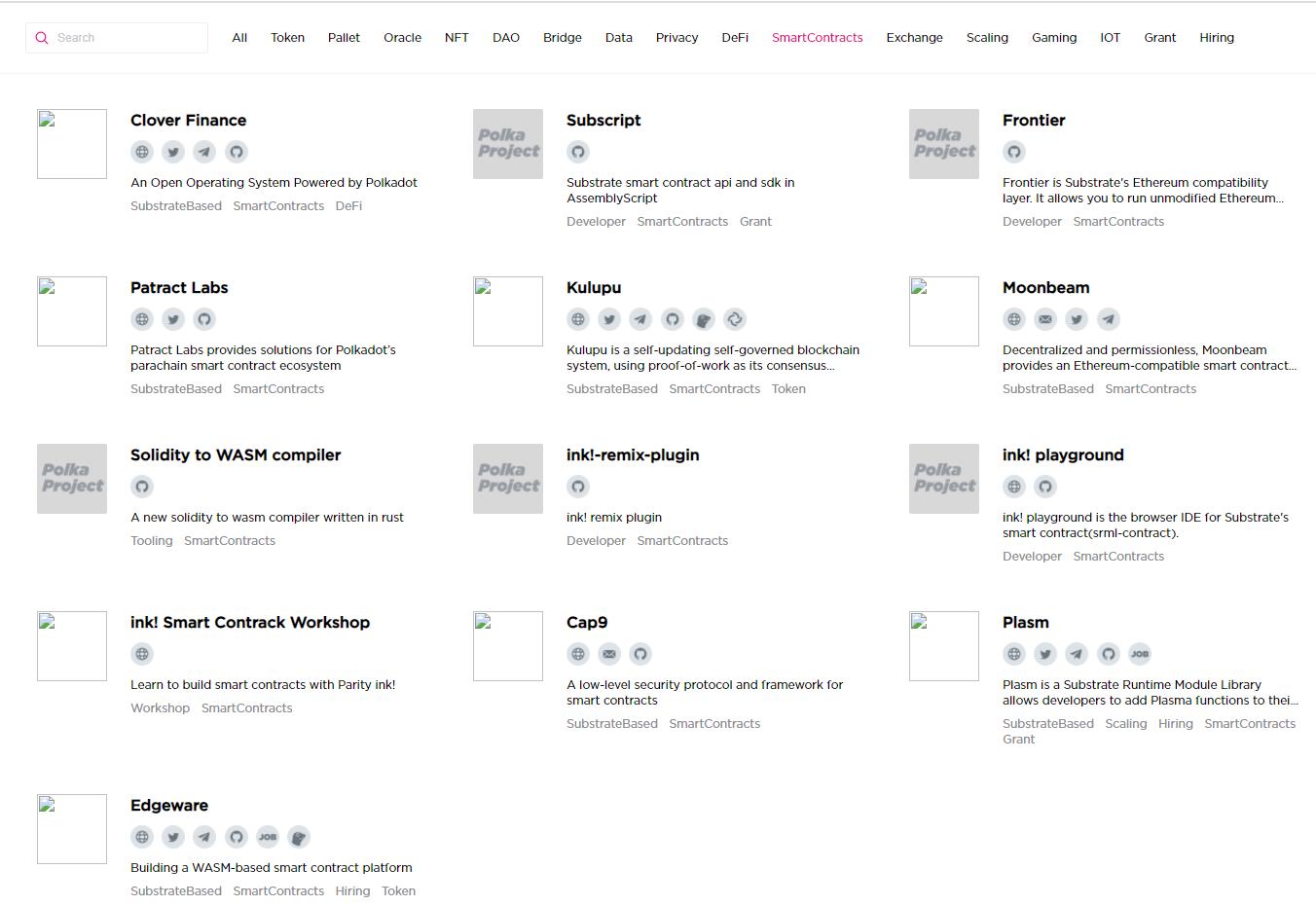 Moonbeam is a decentralized, permissionless, and Ethereum-compatible smart contract platform that allows the creation of interoperable applications natively. Using Moonbeam, you can easily build dApps on Polkadot and integrate them with other blockchains, including Bitcoin and Ethereum. To make it compatible with the existing Ethereum developer toolchain and network, it supports a full EVM implementation, a Web3-compatible API, and bridges that connect Moonbeam to existing Ethereum networks. This will allow developers to deploy existing Solidity smart contracts and dApp frontends to Moonbeam with minimal changes.

Moonbeam will also be a parachain on the Polkadot network. This will provide added security from the Polkadot relay chain and also the applications will be able to integrate with other chains that are connected to Polkadot (once that functionality is available on Polkadot).

The Moonbeam platform is currently targeting Q2 2021 to be launched on Polkadot. It will be launching in Kusama in Q1 2021.

This project aims in creating effective runtime governance solutions for blockchain platforms. Edgeware stakeholders can use an on-chain voting system to vote to upgrade the network, which is done by the nodes automatically downloading a new version during runtime and then upgrading the network. It also aims to resolve the scalability problem by adopting a different architecture.

Edgeware was launched in February 2020 as the first smart-contract chain with a live mainnet. The network has transitioned through three on-chain upgrades.

The project was launched in September 2019, with 0 coins in its genesis block. It then emits 1 KLP per second to miners, till today. 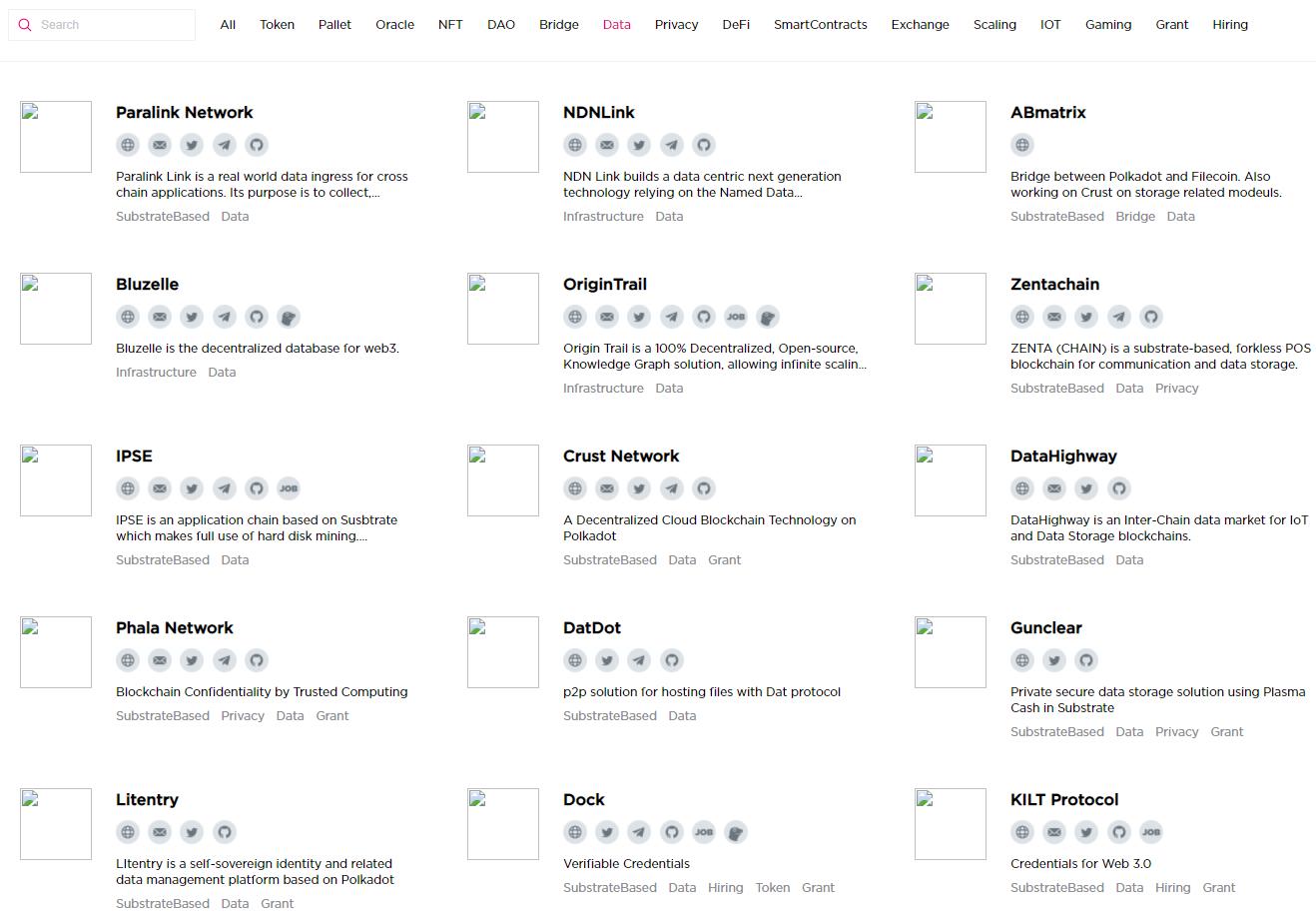 OriginTrail is a decentralized, open-source solution that aims to devise an ecosystem for data connection among various stakeholders in multi-organization supply chains. With this motive, the platform focuses on the infinite scaling of data that can be shared both publicly and privately.

OriginTrail will support universal data exchange (interoperability) by connecting the legacy IT systems (interconnectivity) and ensuring data immutability by utilizing the blockchain technology (integrity) with maintaining a consensus mechanism to ensure data integrity.

The OriginTrail solution’s first version is currently deployed in the food industry. The project is planning to come up with a more open-source solution that will be suitable for any product supply chain, such as automotive, consumer goods, pharmaceutical, etc.

Ocean Protocol is a blockchain-based, data-sharing platform that connects any data source, i.e., individuals, industries, startups, governments, and data and AI experts. The protocol offers safe and transparent data sharing with no geographical boundaries and allows anyone to build data services and marketplaces on top of it.

The protocol aims to unlock data, particularly for AI use cases. It mainly focuses on data scaling and will allow a safe and secure marketplace of data.

It stores metadata, links to data, and consists of a framework that defines authentication and integrity based on available proofs and can serve as a verifiable service agreement, as well as having toolsets for pricing.

To build its core protocol, Ocean Protocol Foundation has contracted

Ocean Protocol is a blockchain-based, data-sharing platform that connects any data source, i.e., individuals, industries, startups, governments, and data and AI experts. The protocol offers safe and transparent data sharing with no geographical boundaries and allows anyone to build data services and marketplaces on top of it.

The protocol aims to unlock data, particularly for AI use cases. It mainly focuses on data scaling and will allow a safe and secure marketplace of data.

It stores metadata, links to data, and consists of a framework that defines authentication and integrity based on available proofs and can serve as a verifiable service agreement, as well as having toolsets for pricing.

In the next part, we will explore some more projects on the Polkadot network.

Mark Cuban, the American billionaire entrepreneur and owner of the NBA’s Dallas Mavericks, has invested ...