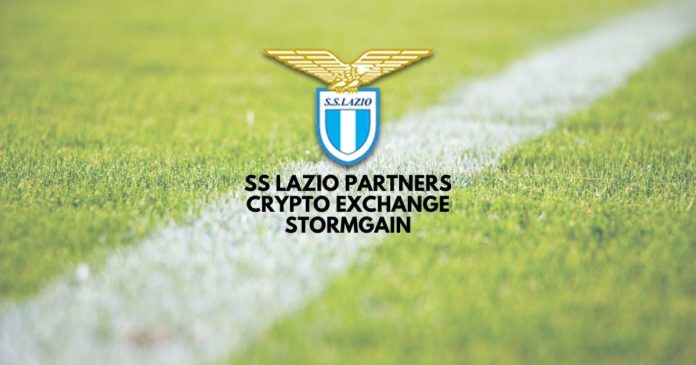 SS Lazio disclosed this news via its official Twitter handle. The club noted that it has signed a multiyear deal with StormGain, a crypto trading platform. The partnership makes StormGain the official crypto trading partner of the sports franchise.

According to the announcement, the new deal between SS Lazio and StormGain came days before the resumption of the 2020-21 football season. The deal offers fans several benefits. These opportunities include the ability to win giveaways, exclusive access to a VIP suite at home matches, private tours at the team’s stadium, and the ability to gain Category 1 tickets for home games.

Additionally, this partnership will help to boost fan interaction with digital currency. Such interaction could then lead to increasing crypto adoption.

SS Lazio and StormGain partnership to bring crypto, football together

StormGain CEO Alex Althausen expressed his excitement with the new partnership. He cited that SS Lazio is a “team with a rich history and values which echo our own perfectly.”

Alex Althausen added that the partnership will bring two distinct communities together. He said, “Through this sponsorship, we’re thrilled to join the worlds of crypto trading and football together. And to offer many exciting benefits for our clients, who can win exclusive access to the Roman superstars and unique prizes thanks to StormGain.”

Similarly, SS Lazio’s director of marketing, sponsorship, and events, Marco Canigiani, noted that the deal will help the football club increase its international landscape. He added that the partnership will assist the club in establishing more favorable projects for its fans.

Other crypto and sporting organization collaborations

It’s worth noting that SS Lazio’s partnership with StormGain is not the club’s first deal with a blockchain or crypto-related firm. Previously, the football team partnered with Sorare, a blockchain game provider, to create tokenized player cards on the Ethereum blockchain.

Also, before partnering with SS Lazio, StormGain was sponsoring Newcastle United Football Club. However, the crypto exchange officially ended their partnership last month. Watford football club is another notable sporting organization that has embraced crypto. Other football clubs of note that have forayed into the crypto sphere include Juventus, Atletico Madrid, and Barcelona.

For more information on other sporting platforms partnering with crypto exchanges, check out the official Altcoin Buzz YouTube channel.