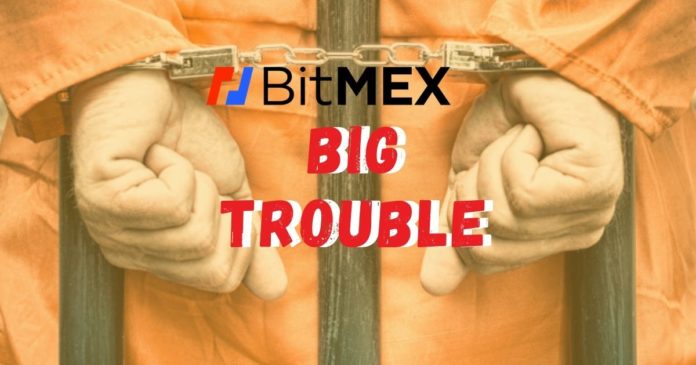 The bitcoin derivatives exchange BitMEX is in hot soup. According to a statement by United States Commodity Futures Trading Commission (CFTC), the exchange is facing charges for operating illegally in the United States and for violating AML (Anti-Money Laundering) regulations.

CFTC has filed a civil enforcement action against BitMEX owners and operators. The official statement released on October 1 reveals that CFTC  will take action against five corporate entities and three individuals. According to the action filed by CFTC, the exchange should have registered with the CFTC before involving the U.S. residents.

Along with that BitMEX should have established programs to ensure that it was not facilitating money laundering in any form. According to the prosecutors, the executives of the exchange were aware that U.S. residents were using the platform and they deliberately chose to skirt the requirements.

Who is in trouble?

Undoubtedly, CFTC is showing no compassion towards the owners and the corporate entities involved in BitMEX. It has demanded restitution of all the monetary gains made by BitMEX. According to the commission, the exchange provided leveraged trading services worth $1 trillion and earned over $1 billion as trading fees since 2014. However, it failed to adhere to the basic compliance procedures like Know Your Customer (KYC) and Anti-Money Laundering (AML) procedures.

In addition to the restitution, CFTC has also demanded civil monetary penalties and permanent trading bans. The commission has now charged Arthur Hayes, Ben Delo, and Samuel Reed, the owners and operators of BitMEX. According to the latest update Reed was arrested on Thursday morning, the rest of the executives still remain at large.

The three founders and BitMEX’s first employee Gregory Dwyer are also facing charges of violation of the Bank Secrecy Act. If proved guilty, the four might end up serving maximum imprisonment of five years and a $250,000 fine.

As soon as the report surfaced, the crypto-space turned into a circus. This is because BitMEX sits over bitcoin worth $2 billion in their vaults which includes both user deposits and liquidation funds. Following Reed’s arrest, the exchange users started panicking because BitMEX withdrawals are ¾ multi-sig. This means if 2 founders are out of commission, the BTC withdrawals will halt.

Undoubtedly, BitMEX is trying hard to control the panic levels. The exchange processes withdrawals only once a day, however, to ensure users that their funds were safe, it allowed users to withdraw their BTC holding beyond the withdrawal window.

It is a known fact by now that BitMEX is no longer the king of the bitcoin derivatives market. According to the chart below, BitMEX now trades just over 10% of the total BTC derivatives market share. And on a day like this is a piece of good news.

As soon as the CFTC news came out, the bitcoin price dropped by almost 4% but it recovered immediately. However, after a gap of 5-6 hours, the price started dropping again. At the time of press, BTC is trading at $10,497.

Imagine the state of the market if BitMEX had not lost its market share to Binance, OKex, Huobi, and more such exchanges.

Open Interest on BitMEX is dropping!

According to cryptocurrency analytics platforms Coinalyzetool and ArcaneResearch, users are closing their position on BitMEX and this is leading to a drop in open interest. Since the CFTC announcement, the open interest has dropped by 16% and has touched 45,112 BTC.

The open interest on the BitMEX Bitcoin perp has fell further throughout the night, and reached 45,112 BTC at 07:00 (GMT+2).

The open interest (measured in BTC) is currently down 16% since the CFTC announcement. pic.twitter.com/GTnI291Enu

The case was building up since 2019

According to the crypto trader and influencer Scott Melker, in the past 6 months, 3 people who claimed to be ex-BitMEX employees reached out to him. They requested Scott Melker to contact CFTC to report some issues but he never did that. In 2019, Scott tweeted that BitMEX cannot be trusted as it has faced failed stop loss and system overload in the past.

In the past 6 months, I have had 3 people who claimed to be ex-employees of Bitmex reach out privately and tell me that all of my assertions were true. All 3 told me to contact the CFTC (I never did) because they would be investigating Bitmex. Seems they were telling the truth.

There are some reports that suggest that CFTC was investigating BitMEX for a long time now. The commission speculated that the U.S. residents were using VPN to use BitMEX as it was formally banned in the U.S.

To learn more about the BitMEX trouble do check out the detailed video by Frank on our Altcoin Buzz YouTube Channel.

Will Paypal’s grand plan for entering cryptocurrency push BTC price to $20,000 or will the ...