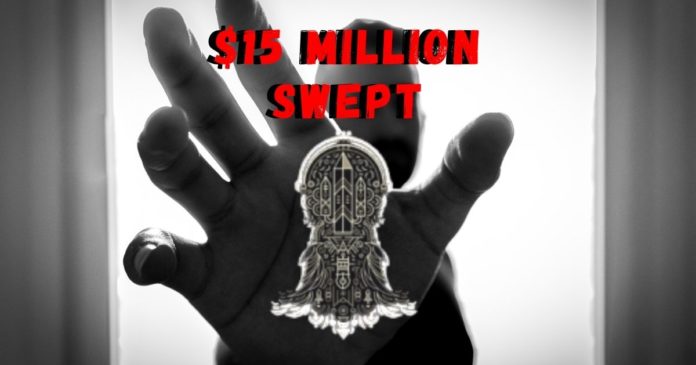 The explosive growth of Yearn Finance allured DeFi scalpers to Eminence Finance, the next big Andre project. These high-risk appetite DeFi proponents lost $15 million as the unaudited code of Eminence was exploited by an attacker. The project was not due to go live until the next three weeks and information was made public. As a matter of fact, there is no website, no documentation, and no discussion groups that reveal any information about Eminence Finance.

Last night, Eminence smart contracts were deployed for a test in prod. No announcements were made by Yearn Finance as the code was still untested and unaudited. As soon as the DeFi community caught the wind, users started purchasing EMN tokens. Precisely, the tokens were bought using Dai via Etherscan. At the time of press 22,522 Eminence token transactions can be seen on Etherscan.

This is not the first time a DeFi project faced such a rapid fall. It was Curve’s Curve token DAO which was the first project that was released without the knowledge of the creator. However, Curve’s code was near completion and luckily did not have any bugs to be exploited.

Disastrously, fate did not favor Eminence at all. Its code was still under construction and had a bug that was exploited by the attacker. Penetrating the code via a soft spot, the attacker swept the smart contract clean and made away with $15 million. However, the attacker did return $8 million to Andre’s yearn deployer account.

As I am receiving a fair amount of threats, I have asked yearn treasury to assist with refunding the 8m the hacker sent. The multisig is safer and as such I feel more comfortable with them having the funds. Funds will be returned to holders pre-hack snapshot. https://t.co/wbputn5hYD

Following this, Andre has moved the funds to Yearn Treasury and from there these will be sent to EMN token holders. The amount of distribution will be based upon the pre-hack screenshot of the contract.

Crypto Community is with Andre

According to Andre, this was a simple exploit. The attacker minted a lot of EMN at the tight curve. Following which he could have burned it for other currency and then sold the currency for EMN.

Jeff Kirdeikis, CEO TrustSwap, and many other leaders in the space are extending their support to Andre through their tweets. According to Jeff, the code was unfinished and it is high time DeFi users start acting responsibly.

At the time of the press, Andre states that he will continue building Eminence, the NFT game. The game was suggested by a Twitter user IslandKiyo and was inspired by a card-collecting role-playing game. What happened with Eminence and EMN holders makes it clear that DeFi users need to be patient until the contracts are audited and established.

For daily crypto-updates do check out our Altcoin Buzz YouTube Channel.

Band Protocol has announced a partnership with Coin98 Wallet, a renowned decentralized wallet. Having multi-chain ...